Founded in 1929 with the purpose of supporting research on the history of Stanstead and the collection of documents and artefacts of historical significance.

History of the Society

On September 29, 1928, a group of local residents met at the Mansur Schoolhouse at the “Boyton Road Turn” with the express purpose of forming a Historical Society. They were descendants of the early settlers to the Township, concerned about the preservation of historical data and of valuable items of significant interest and for the heritage of the region and its inhabitants.  The minutes of this preliminary meeting record that “the purpose of the proposed historical society will be to collect and preserve incidents, records and relics relating to the history of Stanstead Township and to provide suitable markers for spots of historic interest”.

It was a year later, at a meeting on August 17, 1929 that the Stanstead Townships Historical Society, now known as the Stanstead Historical Society, was officially founded. A constitution was drafted and Colonel B.B. Morrill was elected as the Society’s first president. Shortly afterwards, the Society moved from its first meeting-place at the Mansur School to the top floor of the registry office in Stanstead.

In 1965 the Society began publishing a local history periodical that has appeared every two years since then without interruption. Gradually, the membership of the Society grew in numbers, and so did the collection of archives and artifacts. In fact, so much so that the in 1973 the first actual museum, equipped with adequate space for consulting the Society’s archives, was opened in a converted schoolhouse in Beebe. In 1986, the Society sold the converted school in Beebe and bought a property in Stanstead, the former R.C.M.P. building on Duffertin Street, to accommodate the Museum and Archives. Since 1992, Carrollcroft, a classical Georgian style villa, built in 1859, has become the center of all the Society’s services and activities.

This “history” is based on a text by the late Irene H. Blanford, a past president of the Society.

In 1965, the Society began published a local history periodical under the title: Stanstead Historical Society Journal. The fact that this periodical has maintained a regularity of publication without interruption and a high quality of scholarship over more than half a century is proof of the continued enthusiasm and vitality of our members. Since the Journal is published every two years, we reached a total of 28 volumes in 2019.

In order to mark 50 years of publication the Society has decided to publish a selection of articles from the Journal that is scheduled to appear in June 2016 in both hardcover and soft.

The society’s archives have facilitated the work of numerous academic researchers and resulted in a considerable number of scholarly publications. The most widely acclaimed of these has been Marguerite Van Die’s masterly study of the Colby family: Religion, Family, and Community in Victorian Canada: The Colbys of Carrollcroft, Montreal & Kingston, McGill-Queen’s University Press, 2005, 278p. 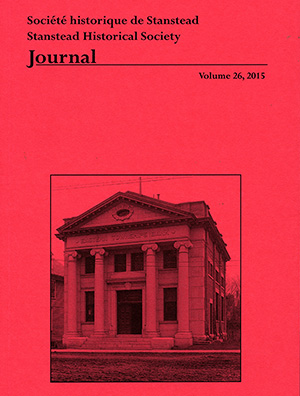 The Society is administered by a Board of Directors elected at its annual general meetings. The Board holds monthly meetings. An Advisory Council is made up of members of the local community.